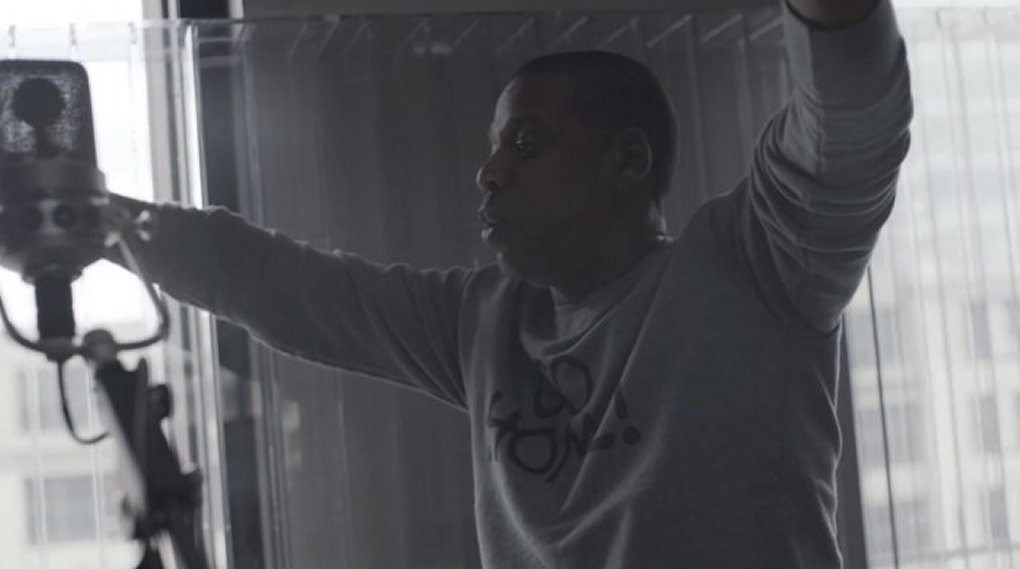 So, it’s settled. Sean “JAY-Z” Carter is an illuminatus. And boy is his coming out somethin’! He sets the record about his personal philosophy straight on “Heaven”, one of many Timbaland-and-some-other-dudes-produced tracks from his new record ‘Magna Carta Holy Grail’. And while some critics see two-facedness, backsliding, or sarcasm in the lyrics, my reading is very straightforward. Or at least as straightforward as that of anyone hip to the traditions and rituals of illumination could possibly be.

Conspiracy theorists screamin’ Illuminati
They can’t believe this much skill is in the human body
He’s 6’2, how the fuck he fit in the new Bugatti
Awww, fuck it, you got me

A simple admission that the haters in the media have been “right” the whole time. But with a caveat, that his illumination is something personal, experienced by him as an individual and not derived from a group. He has skills that other mere humans cannot even comprehend having—the classic battle between homo-neophobe and homo-neophile—and he got to where he is through the exploitation of those skills, not the patronage of some imaginary fraternal organization comprised of the rich, famous, and powerful. No old-world cronyism masquerading as a “New World Order” here.

He precedes this startlingly straightforward revelation by making reference to the 5% Nation of Gods & Earths-derived teaching that Allah is not some “spook” in the sky, but an acronym standing for “arm, leg, leg, arm, head”, meaning the form of the Asiatic Black man. This heretical implication that man is God—a basic tenet of any school of illumination—is the first thing out of his mouth on the record, and is quickly followed up by lines which deftly work in the “12 jewels”, another core teaching of the NGE.

This places his philosophy firmly in a school of thought that reaches from the 5%ers—as well as Malachi Z. York‘s Ansaaru’allah Community, also known as the Nuwaubian Nation of Moors, of which Jay was an affiliate during the late ’80s and early ’90s—through the Nation of Islam, all the way back to The Prophet Noble Drew Ali’s Moorish Science Temple. The latter of which traces it’s lineage back through various Black nationalist groups, magical cabals, Masonic orders, Sufism, and Hassan-I-Sabbah‘s Hashshashin, amongst others; connections he expands on a few short lines later.

Question religion, question it all
Question existence until them questions are solved
Meanwhile this heretic, I be out in Marrakesh
Morocco smoking hashish with my fellowship

The lines about indulging in hashish—a substance with a lengthy history as a component of illuminist rituals, not the least of which being Hassan-I-Sabbah’s legendary use of the marijuana derivative to make his followers think they’d “seen” heaven—with his “fellowship” in “Morocco” are plain-faced and self-evident. While the two previous lines describe the journey of the illuminatus, who questions everything and achieves answers through self-enlightenment. Or, as it was so elegantly put by both Aleister Crowley and Robert Anton Wilson, the path of illumination consists of a never-ended and ever-accelerating procession of “hunchbacks” and “soldiers”—or question-marks and exclamation-points—and to interrupt this process of inquiry is to risk stagnation.

Speaking of RAW, it should be noted that in he and Robert Shea‘s ‘ILLUMINATUS!’ trilogy protagonist Hagbard Celine and his entourage are depicted arriving in Ingolstadt, Bavaria for the “immenentization of the eschaton” in a Bugatti. Yeah, I know a Bugatti is a consumerist symbol of vast wealth, and that Beyoncé bought Jay one of the rare and expensive autos, but are you kidding me? Dude just happens to name drop the car Hagbard, the illuminatus to end all illuminatus’, takes as a veritable wedding present for himself in the aftermath of a massive, public, act of transcendental illumination on his song addressing his own rumored membership in the Illuminati? Da fuck outta here!

But I digress, as the song progresses he directly denigrates organized religion, quoting Michael Stipe’s famous lines from R.E.M.‘s massive hit “Losing My Religion”, and summing it up as a tool used by its adherents—whom he describes as a group of Devil-obsessed “hecklers” and “busters”—to do little but divide. He also compares himself to Jesus, describes himself as “God in the flesh”, likens his rhymes to Bible verses, and elevates his own importance above that of a mere “preacher”. And again, he makes a not-at-all veiled allusion to the fact that his knowledge may in part stem from the smoking of a psychotropic substance of some kind.

I confess, God in the flesh
Live among the serpents, turned arenas into churches
Uhh, I’m like Michael recycled
These are not sixteens, these is verses from the Bible
Tell that preacher, he’s a preacher, I’m a muh-fuckin’ prophet
Smoke the tree of knowledge, drink from a gold chalice

The chorus of the song itself utilizes similar sensual imagery, asking the seemingly rhetorical questions “Have you ever been to Heaven? Have you ever seen the gates? Have you bowed unto your highness? And do you know how heaven tastes?” But Jay makes it clear the questions are meant to be taken a bit more literally, and a lot more confrontationally, as he describes the experience of illumination as a literal visit to the gates of Heaven. Yes, he’s been to the gates. Yes, he knows what “the tree of knowledge” and the beverage served from the “gold chalice” tastes like. No, he’d never bow down to anyone.

You gotta love it
I arrived at the pearly gates, I had luggage
Meaning I had baggage
Niggas askin’ me questions
I don’t answer to these busters

Thus he explicates the classic process of personal illumination; where one must separate the logogram—or the “baggage” we’re saddled with by society, our parents, so-called authority figures, etc., which fucks us all up—from the biogram—the innate, possibly genetic, knowledge of humanity and its nigh infinite potential—and merely “exist” unburdened by anything, especially the judgements, expectations, and guilt-trips of others still locked into the authoritarian mind-trip as if in a heavenly state. That he does it using the symbol-rich language of the logogram itself is quite beautiful in its own way.