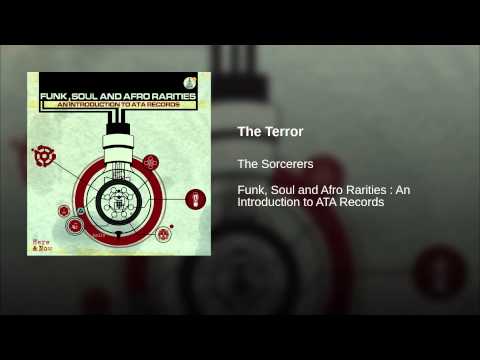 Unlike most entries, which I usually pull from the WABAC Machine, this week’s Monday Magick is brand ass-spankin’ new. Or at least I think it is. The tune in question is called “The Terror” by a band that goes by the unequivocally magickal moniker The Sorcerers, and it’s from a compilation album titled ‘Funk, Soul and Afro Rarities : An Introduction to ATA Records’ from upstart British indie ATA Records.

From what I gather ATA Records is something like the UK’s answer to the Daptone Records family of labels and artists here in the states. Their website describes them as being based out of a studio full of vintage equipment in Leeds. They go on to describe themselves as committed releasing music that hearkens back to “classic 60’s & 70’s soul, gospel, funk, r&b, jazz, library, big band, film music” made by “great musicians, real instruments, plenty of valves and tape machines”. Sounds like new music that’s mean to sound old to me.

Well, old, and funky. Or should I say fun-kay? Ehhh, probably not. Regardless, “The Terror”, an Ethio-Jazz-flavored instrumental, from the otherwise unknown The Sorcerers is exactly that…funky. Dig the ominous keys, horns and woodwinds on this! It’s got a bit of a Mulatu Astatke meets The Meters sort of thing going on if you ask me.

The Sorcerers, whoever they may be (the ATA website doesn’t currently offer any artist bios), are reportedly preparing an album which ATA says is “coming soon”. Hopefully they don’t skimp on the eerie sounding occult-themed Funk.