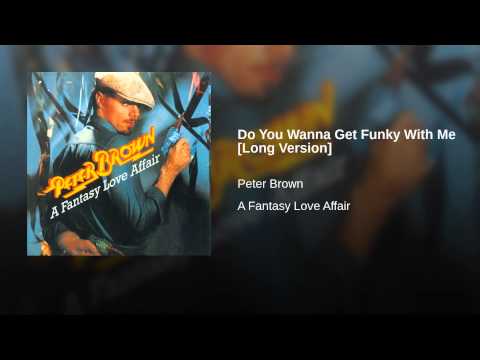 Monday Magick goes back to the vinyl archives this week to unearth a rare jam that mixes The Devil with funky Disco music. It’s a lengthy dancefloor stomper from Chicago-bred percussionist, singer, and producer Peter Brown’s 1977 TK Records debut ‘A Fantasy Love Affair’ titled “Do You Wanna Get Funky With Me”.

The title “Do You Wanna Get Funky With Me” may seem pretty innocuous in and of itself. But the song, which provided Brown and the TK label the first gold 12” single in music history, features some dark lyricial content. At least “dark” by the standard of 1970’s discotheque fodder. See, while Disco was derived from the Blues tradition, with it’s well-known traditions of crossroad deals with The Devil and debaucherous content, Soul music (which played an important role in the development of Funk and Disco) was equally as beholden to Black church music, which didn’t exactly promote congress with forces diabolical. But Brown’s monster jam doesn’t shy away from the unwholesome aspects of “the Funk”. He spends almost ten minutes spinning a tale of temptation, lust and sin inspired by a sexy disco lady who turns out to be “the devil in disguise”. “The idle mind is a playground for the devil” he opines as female background voices shout “I wanna set you on fire…’Cause it’s HOT” alongside moanings which could be extasy or agony. As funky as the track, with it’s P-Funk-esque bass and chicken scratch guitars, is, the aforementioned “idle minds” may have been just as influential as dancing feet when it came to record sales as the single cover featured a striking image of a nude woman in silhouette. Sex, the occult, and a beat you can dance to…What more can you ask for?

Brown went on to release a handful of records on his own, and earned production and writings credits for other artists, including Madonna for her hit “Material Girl”, before retiring in the late ’80s. He currently lives and works in Colorado.