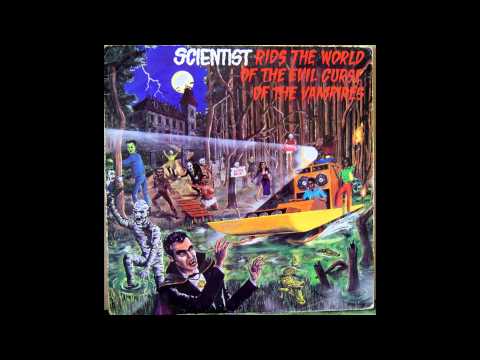 Here at Monday Magick we enjoy some diversity in our otic occult obsessions, and this week is no exception. I’ve often lamented the difficulty in finding Reggae tunes with a supernatural bent in this space. But this week I hit paydirt in the form of “The Voodoo Curse” by Dub mixologist Scientist, from his 1981 LP ‘Scientist Rids the World of the Evil Curse of the Vampires’!

King Tubby disciple Hopeton Brown, also known as Scientist, was a child prodigy who quickly rose to prominence in the Reggae scene as an engineer at Channel One Studio. He became known for his production, mixing, and radical Dub remixing, working with the Roots Radics band—who laid down the track for “The Voodoo Curse”—and the Tuff Gong label before relocating to the United States in the mid 80s, when he released a string of outlandishly titled albums largely consisting of his dubs of sides recorded with Roots Radics as house band for other artists. “The Voodoo Curse” is just such a Dub rework of “What A Feeling”, a sufferers anthem by vocal group the Wailing Souls. Scientist strips the tune way down, often to nothing more than the signature bass riff with eerily reverberating hi-hats, snares and effects dropping in and out of the mix. It’s mystical, spacey, and oddly claustrophobic, like all good Dub is supposed to be.

Over the years Scientist has worked with a number of Reggae greats including King Tubby and Prince Jammy. He’s released a ton of albums, the most recent of which, ‘Repatriation Dub’, just dropped in 2014.