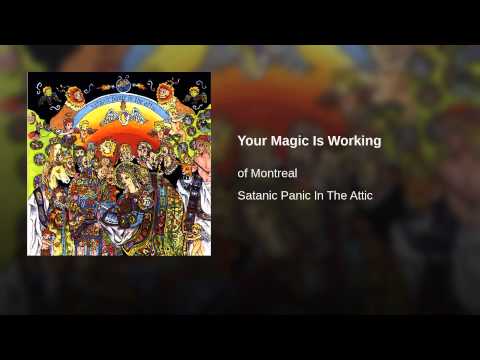 This week Monday Magick is bringing you something soft and fluffy in place of our usual dark and spooky offerings. The song in question is the decidedly upbeat “Your Magic is Working” from Athens, Georgia-based Indie-Pop outfit and multiple Monday Magick featuree of Montreal’s sixth LP ‘Satanic Panic in the Attic’, released in 2004 by the Polyvinyl label.

My reasoning for picking “Your Magic is Working” this week is rather simple; I haven’t been able to get it out of my head for the entirety of the last week, and it has “magic” in the title. It probably helps that of Montreal is one of my favorite musical acts of the modern era and ‘Satanic Panic in the Attic’ is one one of their more incredible albums. Oh, and the title of the album shouts out Satan, so there’s that too. No, the song may not be overtly occult or diabolical in any way shape or form, but I freakin’ love it, in all its sunny “la-la-la”-fueled glory! And since I’ve been feeling especially magickal since recharging my magickal battery with the occult fellowship I mentioned in last week’s post I thought it was more than appropriate to feature here. Deal with it.

Over the years of Montreal has gone through a number of incarnations, including being a virtual solo project for frontman Kevin Barnes. But whatever shape the “band” took or takes, they continue to tour and release albums. In fact, Barnes is reportedly readying a new album for release this Summer, and they have tour-dates lined up through the Spring months. Go check them out. They’re amazing live.