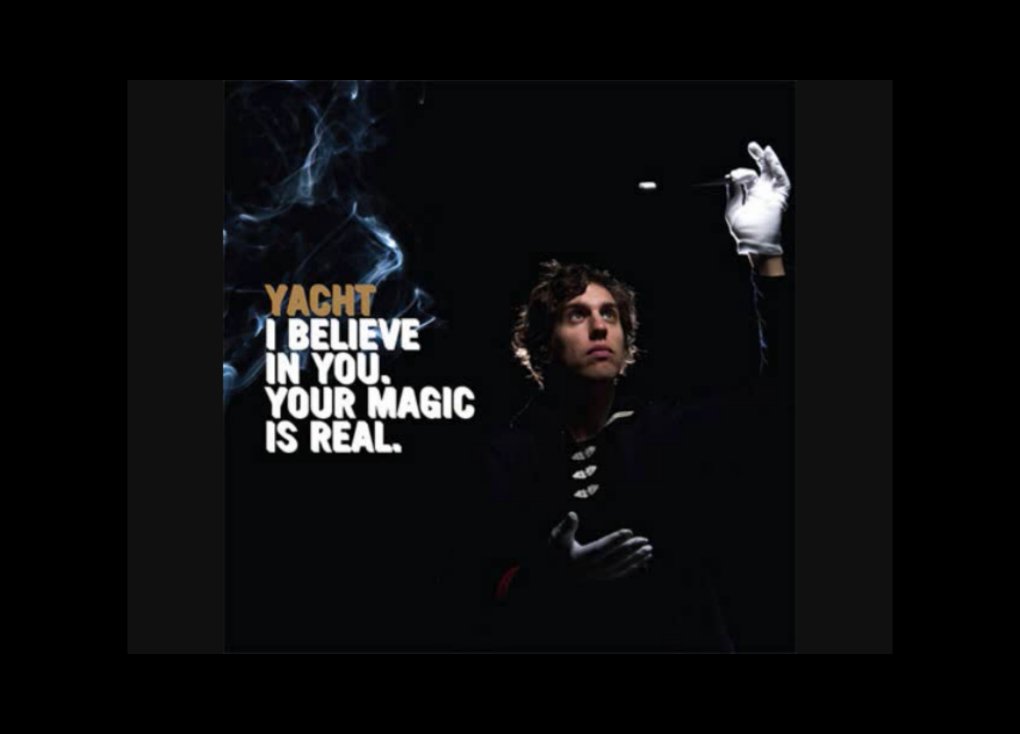 The last few weeks have been pretty fucking terrible. As such I’ve made a handful of attempts at posting “feel good” songs in this space rather than the dark-n-gloomy shit Monday Magick is often known for. Sadly, last week ended with a real kick in the gut. As such, this week’s entry, “I Believe in You” from LA-based-but-Portland-bred Synthpop act YACHT’s 2007 LP ‘I Believe in You. Your Magic is Real.’ is going to continue the trend by being unbelievably upbeat to make up for how crappy my life is.

Built around plucky repetitive Punk-inspired guitars and rinky-dink organs that ride waves of deep programmed bass, “I Believe in You” splits the difference between live-band Indie Rock and studio-whiz-kid Electronica. Vocally and lyrically it owes something to the surreal goofiness and arty nerdiness of groundbreaking Indie/Alternative acts like the Talking Heads, the B-52’s, and They Might Be Giants with its narrator, YACHT frontman Jona Bechtolt, spewing forth a silly stream of conscious line of hypothetical questions designed to inspire more magickal thinking and behavior in the listener. The real magick however comes from the chorus, where a sweet female vocal intones via a catchy-as-hell melody that “Your magic’s real” and asks “why aren’t you using it” before assuring us that “the magic” inside us “is infinite”. The positivity of being urged “not to worry” about using one’s inner magic, that we can use it to literally reshape our reality and “have the world to yourself”, and that that magic is “infinite” is practically overwhelming. Over the years YACHT have slipped a lot of magickal messages into their music, but “I Believe in You” is particularly magickal in the most life-affirming way possible.

When it was released in 2007 I assumed that the title ‘I Believe in You. Your Magic is Real.’ was drawn from Michael Jackson’s then-recent MTV Awards speech where he made a similar declaration while thanking street magician David Blaine. After several years and several very magickal releases from YACHT which have belied a deeper understanding of the occult in general and Illuminism in particular I’m not so sure. Their most recent record, ‘I Thought the Future Would Be Cooler’ was released late last year. They’re on tour through the Spring.