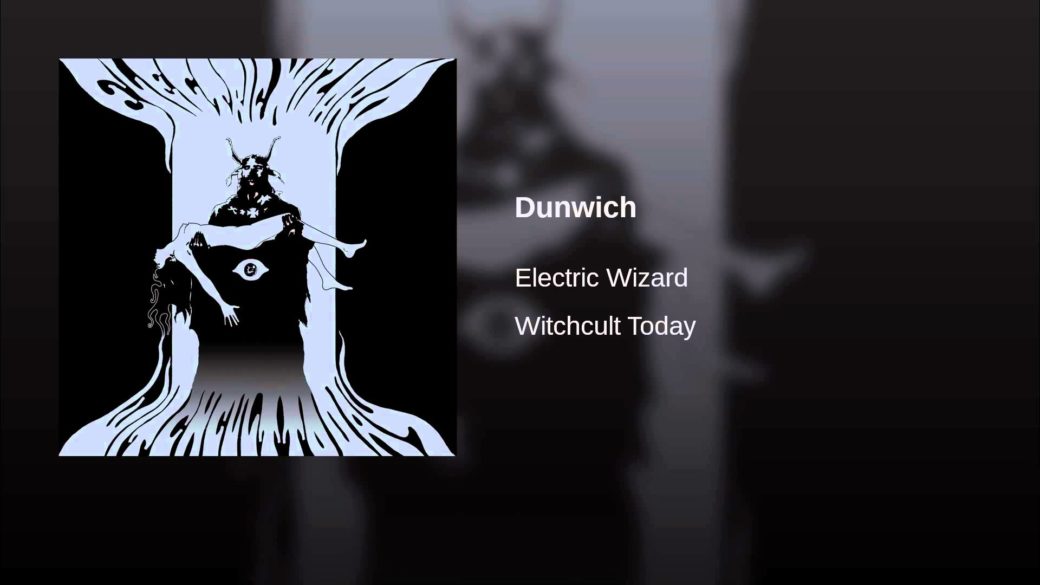 After taking last week off Monday Magick is back and it’s darker, harder, and heavier than ever!  How so, you may ask?  Well, this week we’re featuring “Dunwich”, a decidedly sludgy bit of Lovecraftian Rock by British Stoner/Doom Metal quartet Electric Wizard from their 2007 LP ‘Witchcult Today’!

Longtime readers may have noticed that I rarely share Metal compositions in this space.  This is mainly due to the fact that most public discussions of the occult influence in popular music I happen to witness are dominated by the same handful of names, most of them being Metal or Industrial artists.  Listeners expect a little devil worship, shoutouts to the Great Old Ones, or church burnings to come with darker, heavier brands of music.  Finding a Metal song that references a demon or wizard just feels too…easy. I, for the most part, prefer to uncover references to occult practices and beliefs where they’re not expected, or to spotlight how they seem to hold sway over artists participating in genres where black clothing, pentagrams, and and corpse paint are not considered clichés.  And that’s worked just fine for me, until now.

So, what’s different about Dorset, England’s Electric Wizard and their song “Dunwich”?  First and foremost is the way it came to me; as a share from a new, wholly lovely, and utterly magickal acquaintance who I hope to be discussing the dark arts with and working towards unraveling creation alongside for some time to come.   Second, and of nearly equal import, is the song’s subject matter, which is full of references to H.P. Lovecraft’s short story ‘The Dunwich Horror’ a tale that not only features one of the Lloigor I most identify with — Yog Sothoth — but also contains allusions to  rituals not unlike those advocated by both Aleister Crowley and Jack Parsons, who notoriously executed his Babalon Working in an effort to bring forth a “moonchild” as I have mentioned here previously in connection with the concept of The Scarlet Woman.  Additionally it should be noted that Athol, the real life town many believe to have served as Lovecraft’s inspiration for the titular Dunwich, happens to be located not too far from my current location of Springfield, Massachusetts, a city which I have shown elsewhere was founded by a direct patrilineal ancestor of Parsons who also happened to married to a woman who was tried multiple times for witchcraft during the 1600’s.

In the story ‘The Dunwich Horror’, an aged sorcerer refereed to only as Old Whatley commits heinous acts upon his daughter Lavinia, acting as a human bridge of sorts between the dimensions thus allowing Yog Sothoth to procreate and sire part human offspring with the girl.  The result, Wilbur Whately, is in essence a “moonchild” and due to his unusual characteristics is shunned by polite society. As the story progresses it becomes clear that Wilbur was not the only inhuman monster to arrive on Earth via the Whatley’s strange ritualistic coupling.  The song “Dunwich” expands on the feelings engendered by such eldritch parentage. Over the growl and roar of buzzaw sharp guitar riffs and a made for sampling drumbreak reminiscent of Black Sabbath’s “Wall of Sleep” and Arzachel’s “Azathoth”, the lyrics beamoan the condition of the Dunwich child who was “conceived upon the alter” via “rites obscene” and “knows not” his “father’s name” but has his “father’s eyes”, and exhorts him to “hear the voice of doom, from other worlds”, his “fathers’ call”, and “end the world” that he despises. This echoes the rites practiced by Parsons which were supposedly intended to give birth to the Antichrist but which may have only given rise to an increase in “UFO phenomenon”.  And this of course all casts quite the shadow upon the “debauched” sexual rites that, as presented via Tantra, Alchemy, Kabbalah, Gnosticism, Rosicrucianism, Crowley’s Ordo Templi Orientis, and other schools of “Sex Magick”, are intended to facilitate the escape from, and possibly the destruction of, this reality altogether.