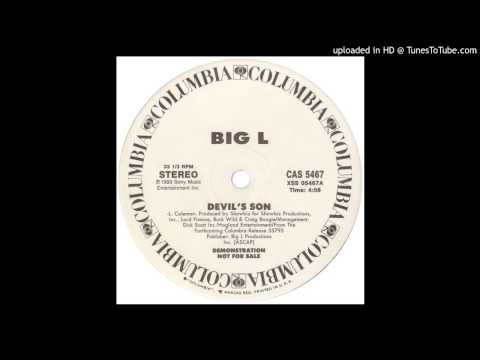 It doesn’t really get more blatantly occult than this week’s Monday Magick entry, “Devil’s Son”, courtesy of Harlem native and Diggin’ In The Crates crew ambassador Lamont “Big L” Coleman. The tune was originally intended to be featured on the emcee’s 1995 debut ‘Lifestylez ov da Poor & Dangerous’ and was actually released as the album’s first promotional single on white label 12”, but was ultimately deemed “too dark” and left off the final tracklist.

Built around two vocal samples of rapper Nasir “Nas” Jones (“When I as 12, I went to Hell for snuffin’ Jesus” from Main Source’s “Live at the BBQ” and “I’m wavin’ automatic guns at nuns” from MC Serch’s “Back to the Grill”, still two of the veteran artists best performances) “Devil’s Son” finds Coleman sort of picking up where Mr. Jones left off lyrically. He busts stream of conscious couplets enumerating his various evil or Satanic qualities in a signature horrorcore style over thick, Jazz-flavored production from D.I.T.C. co-hort Showbiz which lends the track a churning, bubbling quality not unlike a witches cauldron or how one might imagine the pits of Hell sounding. Most of his lines, as outrageous as they are, are played for comedy, or shock value, and they certainly succeed, both in amusing and shocking. It’s been alleged that Coleman originally intended the line “and I kill chumps for the cheapest price, I’m rollin’ with Satan, not Jesus Christ” to end “I’m rolling with Satan, fuck Jesus Christ” but was urged to make the change by associates who felt he’d “gone too far”. Regardless, “Devil’s Son” is a classic of mid-’90s Hip-Hop, especially of the so-called “horrorcore” genre, and a standout in Big L’s canon which includes several incredible records.

Sadly Big L was murdered on February 15th, 1999 at 45 West 139th Street in his native Harlem after being shot nine times in the face and chest. At the time of his death he had guest starred on numerous classic hits, released one solo LP, put out a string of successful singles, had fronted the horror-themed supergroup Children ov da Corn featuring Killa Cam (a.k.a. Cam’ron) and Murda Mase (a.k.a. Ma$e), and was preparing his second album, ‘The Big Picture’, which was ultimately released posthumously in 2000.