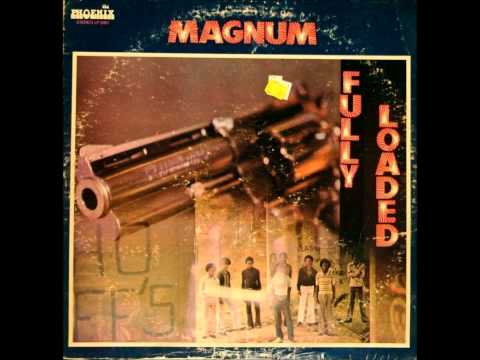 I’ve been pretty stressed out recently, so this weeks Monday Magick entry is on some cool out shit. It’s an extended 7-and-a-half-minute Jazz-Funk fusion instrumental titled “Witch Doctor’s Brew” from obscure California-based band Magnum. And though the track certainly isn’t diabolical by any means, it is the one tune on the 8-piece outfits 7-cut 1974 LP ‘Fully Loaded’ to even half-heartedly reference anything even remotely “occult.”

“Witch Doctor’s Brew”, with its simple meandering bassline, Afro-Latin percussion accompaniment, twinkling electric piano, plucky guitar, and slick horns, sits soundly in the Jazz fusion milieu. A (not so) quick listen (since the song is 7-plus-minutes long) should bring to mind the likes of Roy Ayers Ubiquity, The Crusaders, Mandrill, Ohio Players, Tower of Power, and not less than a few more of their contemporaries. The full length album, which features only original compositions penned by the band itself, including several vocal tunes, explores different aspects of the Jazz and Funk sounds including some that are not necessarily as laid back as the brand of groove offered on “Witch Doctor’s Brew”.

Sadly ‘Fully Loaded’ didn’t exactly set the charts on fire, though it remained a cult classic with crate-diggers for decades. It was the bands only release, and if various members of the rather large group went on to work on anything else of note I’m currently unaware of it.