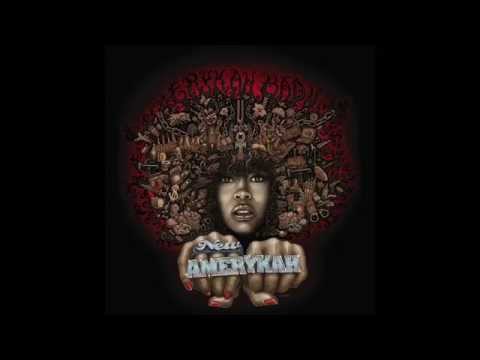 This week’s Monday Magick entry is one of my favorite songs from an artist I have a bit of a love/hate relationship with. The tune in question is the futuristic Funk jam “Twinkle” by Neo-Soul high-pristess Erykah Badu from her 2008 LP ‘New Amerykah, Pt. 1: 4th World War’.

As I mentioned in the introduction to this post, I’m not always a fan of Ms. Badu. Her music is fine enough, but her image and public persona has on occasion (see: her fake dreadlocks during the “enormous headwrap” era, her semi-feud with the Flaming Lips, her use of imagery from Jodorowsky’s ‘Holy Mountain’, etc.) seemed disingenuous to me. Her loose embrace of various occult concepts (usually via references to The 5% Nation of Gods & Earths, Nuwapianism, and Egyptology) has been something that I’ve alternately dug, or found vaguely distasteful, as well. None the less, “Twinkle”, a bass-heavy gut-bucket electronic Funk jam produced by Shafiq Husayn and Taz Arnold of Sa-Ra Creative Partners alongside Mike “Chav” Chavarria and Badu herself, which features several of the aforementioned elements, grabbed me immediately upon its release due to its quality as well as its content. Juxtaposing the socio-economic state of people of African descent in modern America with their ancient heritage Erykah opines that their native religions and languages have been purposely obscured to hide their godhood and disconnect them from an ancient magick. I found it particularly striking to hear a modern singer in the R&B milieu crooning about “descendants of warlocks” and “witches with ill glitches”. That the song ends with a Kemetic chant which mentions being “born from the deepest Black”, a concept echoed in both the “triple stage darkness” of the NGE tradition and the attributes of Nuit as described in Aleister Crowley’s Thelema, lends it that much more philosophical heft.

Funny enough, I once encountered a co-worker who said that she wouldn’t listen to Erykah Badu any more because she believed her to be “an Illuminati”. The woman actually cited “Twinkle” and the “devil talk” it ends with as evidence of Badu’s supposed Satanic ways. That, in case you didn’t know, is some ol’ bullshit.

The most recent project from the apparently gray-haired 44-year-old singer is the ‘But You Caint Use My Phone’ mixtape which dropped in November. It’s gotten a lot of really good press and features her fantastic cover of Drake’s “Hotline Bling”.