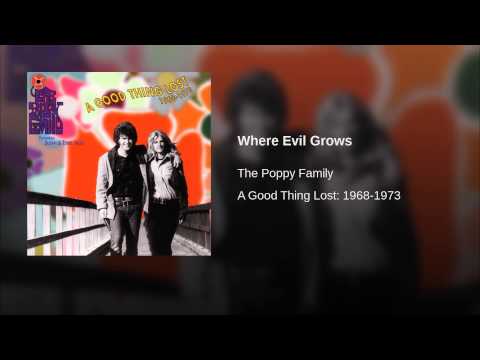 Over the last few weeks I’ve been trying to keep things light here on Monday Magick. But this week we’re gonna get back to the darkness you’ve probably come to expect from our weekly magickal musical feature. Well…sort of. Ya see, “Where Evil Grows”, the 1971 Psychedelic Folk-Pop single from co-ed Canadian duo The Poppy Family is still kind of light, even though it’s totally all about “evil”.

Let’s face it, despite the devilish title, “Where Evil Grows” is probably a parable about the “dangers” of casual sex. According to the lyrics “evil grows in the dark, where the sun never shines”…Evil grows in “cracks and holes”…Evil “is a part of you” which “grows” whenever the male narrator “looks at” you …if ya know what I’m sayin’? Maybe I’m way off base here? But the metaphor feels pretty heavy-handed to me. Just about the only other thing “heavy” about “Where Evil Grows” is the diabolical keyboard riff that opens the song and the instrumental break that comes in around a minute and twenty five seconds into the track which prefigures the Grunge sound pioneered by Nirvana about twenty years later. In case you’re wondering how the “evils” of sticking growing appendages into dark orifices fall under the subject of “magick” (if you don’t know that all magick is sexual, and all sex magickal I don’t know what to tell you) the final verse of the song finds lead vocalist Terry Jacks waxing Thelemic by pledging not to violate the “will” of his sexual/magickal partner. So there.

“Where Evil Grows” was taken from The Poppy Family’s second and final LP ‘Poppy Seeds’ which was released by London Records in 1971. ‘Poppy Seeds’ remains a bit of a vinyl rarity and has apparently not made it to modern music formats. Group members Susan and Terry Jacks both went on to release solo albums. Terry is perhaps still best remembered for his hit single from 1974 “Seasons in the Sun”.