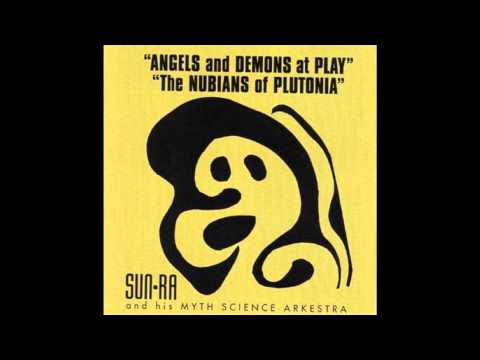 Recently our Monday Magick posts have been getting pretty heavy. So this week I wanted to lay off the deep occult exegesis and let the music speak for itself. Tonight’s candidate is a first-time featuree, Free-Jazz architect and Afro-Futurist figurehead Sun Ra and his Myth Science Arkestra, and the song is “Angels and Demons at Play” from his 1965 LP of the same title.

The bassline is playful and meandering. The percussion sounds like a table tennis match between Lucifer and The Archangel Michael. The scampering rhythm is offbeat and very influenced by African tribal drumming. The flute on the other hand is extremely “eastern” sounding as if inspired by traditional Japanese music. And is that actually a koto I hear in there? I don’t know, but it’s all all at once playful, dark, and mysterious. And it’s a helluva way to unwind on a Monday night!

‘Angels and Demons at Play’, which featured recordings made between 1956 and 1960, was just one of the well over 70 albums released by Sun Ra and his collaborators during his 30-plus year career. Sadly, he passed away in 1993 after contracting pneumonia during a visit to his birthplace, Birmingham, Alabama. His influence on music, Afrocentric thought, and futuristic weirdo culture is undeniable.