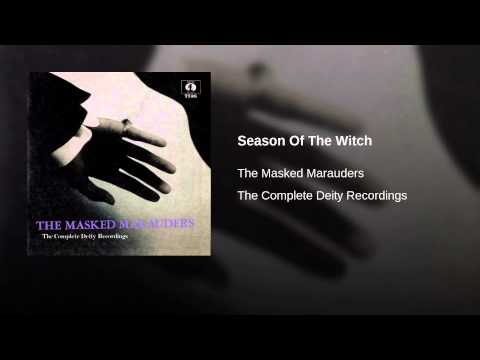 Another Monday in October means another Monday Magick and another cover of Donovan’s psuedo-occult Psych-Folk chestnut “Season of the Witch” by another largely forgotten band.  This week the honor falls to an outstanding take recorded by ’60s “supergroup” The Masked Marauders for their self-titled Warner Brothers Records debut.

I put “supergroup” in quotation marks because the truth of the matter is that while the album was billed as the product of a collaborative jam session produced by Al Kooper and featuring members of The Beatles, The Rolling Stones, and Bob Dylan it was actually all a hoax orchestrated by Rolling Stone Magazine.  Kooper of course was responsible for another actual super session, the album ‘Super Session’ featuring Mike Bloomfield and Steven Stills, that contained its own notable cover of “Season of the Witch”.

The Midnight Marauders recording — which is lengthy, languid, and Bluesy, replete with Jazz & Soul vibes aplenty, fuzzy psychedelic guitar soloing, and vocals inspired by Bob Dylan and Mick Jagger — actually comes off sort of like the child of an unholy union between the ‘Super Session’ version and Lou Rawls’ notably soulful cover.  As such, I don’t think it would have been that hard to believe that Kooper, the founder of Rock & Soul orchestra Blood, Sweat & Tears, had a hand in masterminding the recording of both.

It appears that despite a solid display of musicianship the real folks behind The Midnight Maurauders were a relatively unsung band of Berkeley sessioneers.  There have been a handful of similar hoaxes and fakeouts perpetrated in the music industry throughout the years, from Elvis lookalike Orion back in the 70’s to phony Portishead albums on file-sharing sites in the last decade.  The Marauders themselves never released another project, but their lone LP was re-pressed by Rhino in 2003.