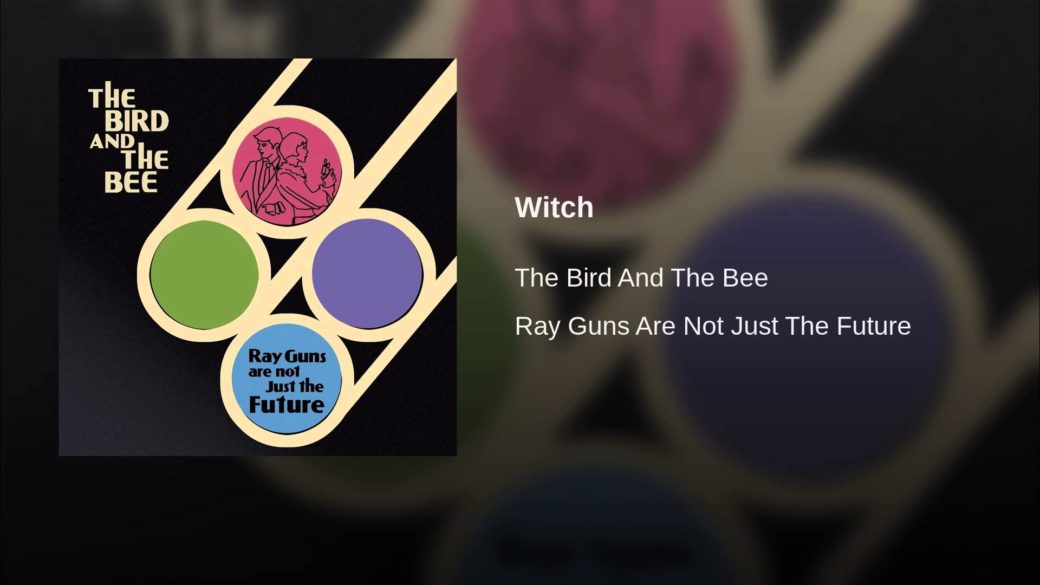 It’s been eight long months since Monday Magick graced this space with its wondrous presence. A combination of factors, including lack of time & energy, changes to my work schedule, big upheavals at home, and a fluctuation in passions, contributed to the hiatus. There have been moments along the way — like the occult “High Holy Days” for example — when I’ve felt inspired to return with an entry. But one thing or another has always stood in my way. That is, until now. The arrival of the month of October — historically “The Season of the Witch”, a time when I share covers of Donovan’s occult classic of the same name — just could not be heralded in without a Monday Magick revival! So here I am with a choice bit of occult-inspired pop culture, the appropriately spooky “Witch” by Los Angeles-based Indie-Pop duo the bird and the bee, with which to capture your attention in this week’s all new & long-awaited edition of Monday Magick!

Admittedly “Witch” is one of the songs I intended to share months ago — last April to be exact — in conjunction with Walpurgis Night, also known as Walpurgisnacht, Hexennacht, Witches Night, or Saint John’s Eve, the night leading into Mayday or Beltane. It was one of the songs I played as part of a Hexennacht playlist while stuck working a twelve hour shift that night and to be honest I had forgotten it existed up until that point. And though the bird and the bee — a collaborative effort between vocalist Inara George and multi-instrumentalist Greg Kurstin that blended the retro kitsch of classic Pop, Soul, Jazz, and Lounge music with modern electronics — were one of my favorite Indie-Pop curiosities from the mid-to-late-00’s I had actually all but forgotten they existed by 2017 as well. Being reminded of the band, and more specifically this particular occult-inspired ditty — allusions to “the dark arts” are not something I’d often associated with the band —from their 2009 sophomore LP ‘Ray Guns are Not Just the Future’ was just the refresher I needed to get back into Monday Magick mode. Or so I thought. Alas, my glorious return to blogging about the love affair between popular music and the occult was not meant to be. Not, that is, until now.

Aside from the moody bounce of the track itself — which incorporates sputtering drum machines, ringing vibraphones, and a majestic string arrangement over a toughly plucked bassline and Hip-Hop-influenced beat for a feel that hearkens to the “Wall of Sound” style common to ’60s Girl-Groups, the sophisticated big-band Soul of Motown’s Funk Brothers, and the Orchestral Chamber-Pop of The Wrecking Crew — what stands out most about “Witch” to me is the lyricism and storytelling. The titular witch at first presents herself as dangerous and threatening. “I have conjured you for my bidding, and all my charms and all my accidents are all just instruments to lock you up” she says, describing the “tricks and magic” she uses to keep you “dizzy with desire”.  But her bravado is only a product of her occult glamour. “I am nothing like the girl you thought I was without your love” she says before admitting that “you can see the seams, the fraying of (her) dress” if you look close enough. She’s a mess. But her occult powers are, she hopes, enough to “con you” like a “house of mirrors” at a “carnival”. But the raw emotion, naked vulnerability and self-doubt she expresses when she wonders “How could I know my spell was broke?” before finally declaring “I am defenseless” betray the hopelessness that sometimes leads people to seek the succor of the abyss that is occult study in the first place. She reminds me a great deal of the protagonist of Anna Biller’s 2016 film ‘The Love Witch’, which I highly recommend for any witch-themed Halloween season movie binges you might be planning over the next month.

If, like me, you forgot about the bird and the bee, or you’ve just never heard of them before, check out ‘Ray Guns are Not Just the Future’ or one of the three other LP’s and seven EP’s they released between 2004 and 2016. Vocalist Inara George’s crooning can also be heard on the her two solo albums and her collaborative LP with Van Dyke Parks, as well as on records by The Living Sisters, Lode, and Merrick. While Greg Kurstin has written, produced, or played for most of our modern era’s Pop royalty, including Adele, Sia, Pink, Beck, Kelly Clarkson, Foo Fighters, and a ton of others.