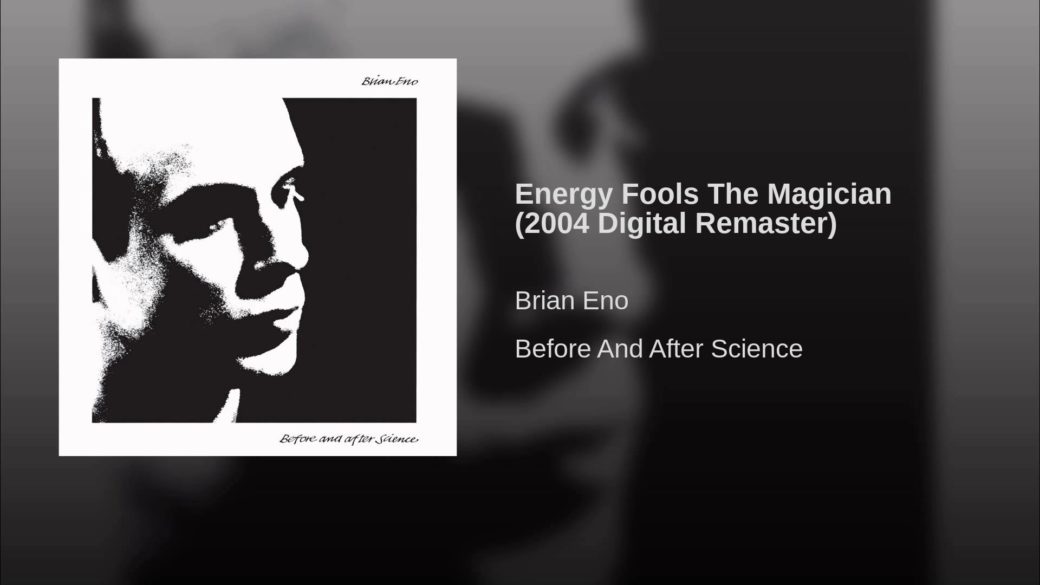 If you’re a longtime reader of this column you know very well how much we love our spooky-themed instrumental compositions here on Monday Magick. You probably also know that these instrumental tracks are often quite extremely lengthy. And while today’s entry, “Energy Fools the Magician” from avant-garde Pop musician, composer, and producer Brian Eno, happens to be an instrumental, is appropriately eerie sounding, and features an allusion to “magick” in the title, it might actually be one of the shortest songs we’ve ever shared.

Though it was originally recorded during the sessions for 1977’s ‘Before and After Science’, the British innovator’s fifth studio album, “Energy Fools…” also appeared on the soundtrack of the Roger Corman-produced musical comedy ‘Rock & Roll High School’ which starred The Ramones.  Though the film it appeared in is admittedly a bit of a head-scratcher, the song’s inclusion on a film soundtrack makes perfect sense as it’s short, almost episodic length and tense feel actually sound like they were made to be background music for some form of cinematic drama. A melange of ambient synths, and mysterious but funky Jazz-influenced orchestral flourishes, “Energy Fools…” brings to mind the soundtrack work Lalo Schifrin, Quincy Jones, and even Goblin.

The title of the song, “Energy Fools the Magician”, stands without much explanation since there are no lyrics. But upon seeing the phrase I immediately thought about rocket scientist and occultist Jack Parsons whose discoveries both mundane and magickal may have not only resulted in humankind reaching the heavens themselves but in contact with extraterrestrial or intradimensional entities. Some of Parsons’ rituals were conducted in the deserts of the Southwest, the same deserts where man first split the atom. This obviously reminded me further of the recent 3rd season of David Lynch’s occult-obsessed epic ‘Twin Peaks’ where Atomic Testing and the magickal ideas espoused by Parsons were on full display and the black magician Phillip Gerard cryptically reminded Agent Cooper of the importance of “ELECTRICITY”.

As mentioned above, “Energy Fools…” first appeared on ‘Before and After Science’ (another tie-in to ‘Twin Peaks’; “is this future or is this past”) which Eno recorded with an all-star cast including members of Can, Roxy Music, Soft Machine, Fairport Convention, and even Phil Collins himself. ‘Before and After Science’ is one of Eno’s 20-something solo studio albums, but he’s released much more than that, as a member of Roxy Music, and in collaboration with artists as varied as David Bowie, Laurie Anderson, David Byrne of the Talking Heads, U2, Grace Jones, and countless others. He still continues to live, work, and record & release music, including the album ‘Reflection’ which was released by Warp Records this year.