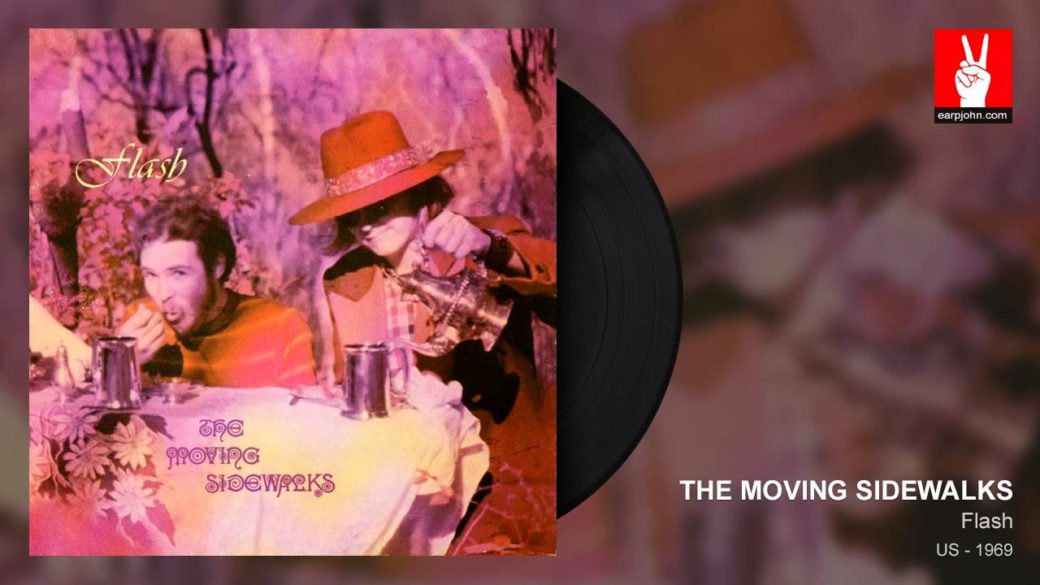 In the years I’ve been publishing Monday Magick I’ve featured a lot of songs that contain very overt occult symbolism. I’ve featured a lot more that seem pretty innocent at first but upon deeper inspection can be interpreted using magickal thinking to have a deeper occult significance. And I’ve featured more than a few that, while maybe having an ooky-spooky title that alludes to witchcraft or The Devil aren’t really very occult-y at all. This week’s entry, a raw late ’60s Psychedelic-Blues jam by The Moving Sidewalks called “Crimson Witch”, is one of the last type of songs. It’s not super-spoopy,  never really expanding much on the titular witch, but it’s fun and funky as fuck.

While The Moving Sidewalks certainly aren’t the best known band of the psychedelic era the Texas-bred quartet’s founder, guitarist and singer Billy Gibbons, would go on to household name status with his next band ZZ Top. “Crimson Witch”, from the Sidewalks’ 1969 Tantara Records LP ‘Flash’, bears little resemblance to that band’s most well-known output save a generally Blues-based foundation. It has far more in common with the output of Jimi Hendrix and his Experience, the Paul Butterfield Blues Band, The Doors, or “Just Dropped In (To See What Condition My Condition Was In)” by Kenny Rogers and The First Edition than say “Legs” or “Sharp Dressed Man” by Gibbons’ hirsute trio.

The heavy drum-break fueled rhythm, psychedelic vamping, trippy lyrics and hazy vocals, with their oddly shifting cadence and lazily drawled delivery, are in fact all extremely reminiscent of the output of James Marshall Hendrix.  And it’s in the lyrics, which like Hendrix’s “Purple Haze” could easily be a reference to drugs rather than the supernatural, where we find the most subtle hints of any occult underpinnings that might exist to explain the title “Crimson Witch”.  Billy sings of thinking obsessively of someone (a “Crimson Witch” or “Scarlet Woman” perhaps?) whose influence has his head “in another place” and his mind “falling” from “infinity”. He finally pleads with the object of his affection to “open up her mind” and see what she really is as if she’s not aware of the extra-normal affects her mere existence has on others. I’ve had this exact conversation with magickal creatures who’ve crossed my own path at one time or another myself, so I feel his pain.

As I mentioned above, The Moving Sidewalks would only release the one album in 1969 before Gibbons and Dan Mitchell formed what would become ZZ Top. As I’m sure you’re aware ZZ Top would go on to create several Classic Rock staples and crank out popular fare well into the ’80s. Their “Sharp Dressed Man” even appeared in a key scene in Season Three of David Lynch and Mark Frost’s occult opus ‘Twin Peaks’. Surprisingly Gibbons reunited with all original members of The Moving Sidewalks for what was billed as a one-time reunion show in 2013 and wound up playing handful of other dates that year.