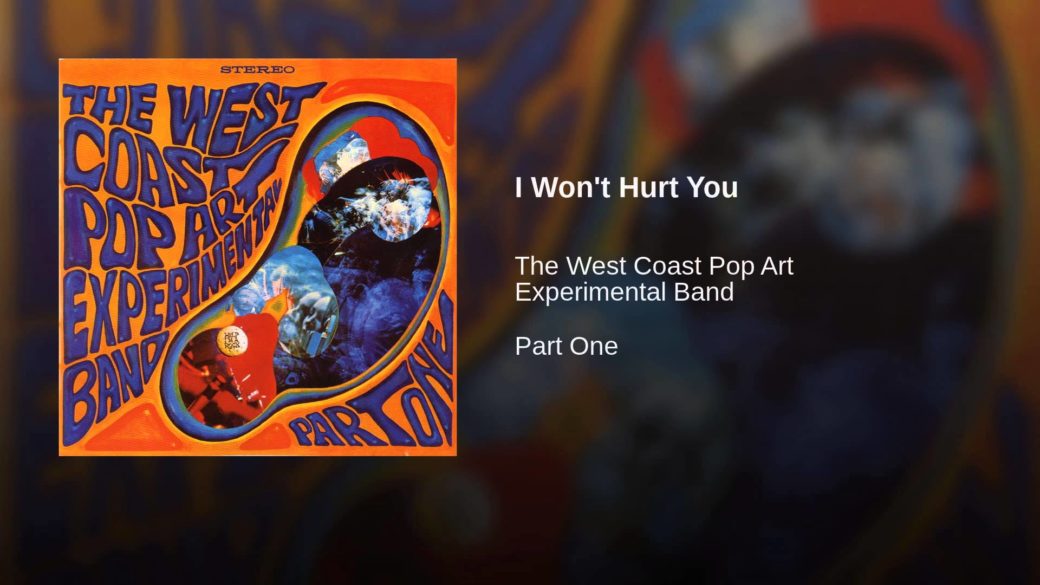 A few weeks back I went to see Wes Anderson’s stop-motion animated film ‘Isle of Dogs’. I don’t particularly care for dogs, but I enjoyed the film. This isn’t too surprising since Anderson is one of my favorite modern filmmakers and has consistently amazed me throughout his career. Though it has become something of a cliché of his oeuvre one of the many things I find enjoyable about his work is his propensity for lacing his films with obscure but memorable (and often depressing) needle-drops.  ‘Isle of Dogs’ only includes one such memorable song, but it’s used several times throughout the film. And as you might expect it struck me in a way that had me distracted from the on-screen action, dissecting its lyrics, and ruminating on how perfect a candidate it was for a Monday Magick feature.

The musical cue in question is “I Won’t Hurt You”, a selection from Los Angeles based Psychedelic Rock unit The West Coast Pop Art Experimental Band’s 1967 major label debut ‘Part One’.  And while it provides accompaniment to scenes depicting the love and care inherent in the relationship between humans and their animal companions, that’s not what the song is actually about by any stretch of the imagination. Rather, the song’s lyrics seem to elucidate passionate feelings of longing and yearning associated with romantic love. But what was particularly interesting to me is that the declarations of love contained in “I Won’t Hurt You” are couched in language and imagery that I can only describe as mystical and initiatory. And the themes explored mirror those discussed in the last Monday Magick column I posted where we analyzed Dent May’s “Take Me to Heaven” through the lens of the apocalyptic image of The Great Liberating Mother goddess Babalon and the magickal currents associated with her veneration.

Taken at face value “I Won’t Hurt You” wouldn’t seem like the sort of composition to explore such material. The title has the ring of a reassurance from one lover to another that they have good intentions towards the object of their affections. The song’s subdued “lub-dub” rhythm and softly crooned vocals even underscore that interpretation to a certain degree. But the lyrics being cooed by bassist and vocalist Shaun Harris have a dark, almost threatening air that contradicts the assumed intent, that of a pledge of undying fidelity, of a song called “I Won’t Hurt You”. Or at least they would if the threats of physical destruction weren’t all self-directed. While the song may be called “I Won’t Hurt You”, and the chorus repeats those reassuring words, the narrator’s declarations of dedication to the object of their affections all seem to involve some amount of pain, self-sacrifice, and ultimately self destruction. And to my ears that sounds like someone who has learned to love as a ritual act of adoration, dedication, veneration, and devotion via the path of occult initiation. A path that involves crossing the abyss, reconciling the sephiroth and the qlippoth, unraveling creation, experiencing the paradisaical joy of oblivion, and being reborn in the primordial waters of chaos.

In the first verse our narrator admits to attaining to paradise without a guide, a victim of their own fiery will to power, which leaves them eviscerated and free of the egotism so common to our reality. Free to love completely. This is the crossing of the abyss…the dark night of the soul…entering The Black Lodge…Chapel Perilous…ego death…or transcendental illumination. The journey of the shaman…the Black Brother…the initiate. The second verse reiterates this association, describing the untouched source of pure thought, the prima materia which is likened to a jewel that “shines without illumination”, alongside an allusion to their lover’s visage being akin to constellations of stars. This brings to mind the triple darkness of Nuit, one of many avatars of our Mother Babalon, whose black body forms the star-dappled arch of the night sky.  This language feels ripped from the very pages of Alesiter Crowley’s ‘Liber AL vel Legis’ or Jack Parson ‘Liber 49’ and is continued in the last verse which finds the narrator referring to their lover as a star and begging to be struck down with a bolt of lightning and buried among the ashes like some charnel ground dwelling Tantrika.

Obviously my very personal interpretation of these lyrics flew in the face of the songs relatively sentimental use in ‘Isle of Dogs’ and is likely an over-analysis on my part that bears little resemblance to the intentions of its writers’, band members Michael Lloyd, Danny Harris, and Bob Markley.  But hearing it over and over again as I watched the film was a jarring experience, and as I pored over the lyrics on my way home from the theatre these deeper possibilities of meaning and import struck me like the aforementioned obliterating lightning bolt wished for by the songs narrator. While I admittedly felt a great deal of personally specific relevance to the themes of desire, yearning, dedication, and self sacrifice expressed on “I Won’t Hurt You”, it quickly became obvious that they possessed a universal esoteric application and I would have to share the song and the thoughts it stirred up in this space sooner rather than later. Since these were topics I’d been wrestling with in my personal life and I was already being revelatory about my feelings regarding them in the feature I was putting together on Dent May and his “Take Me to Heaven” it seemed apropos to pair the two.

Though this version of “I Won’t Hurt You” originally appeared on The West Coast Pop Art Experimental Band’s ‘Part One’ LP a different recording was previously released on their independent debut ‘Volume One’. The group would go on to release four more full length albums before disbanding amidst disillusion with the changing times and dissatisfaction with the group’s founder, Bob Markley. Several group members went on to various measures of success in the entertainment industry, but sadly Markley, Harris, and guitarist Ron Morgan have all passed away.