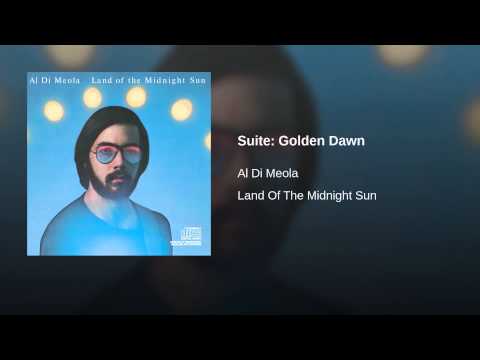 This week’s Monday Magic featuree is another entry in an ever-growing list of massive instrumental Jazz suites we’ve featured in this space. The track in question is the nearly ten-minute “Suite: Golden Dawn” from guitarist Al Di Meola’s 1976 Columbia Records LP ‘Land of the Midnight Sun’.

Is the name a nod to the British occult fraternity The Hermetic Order of The Golden Dawn? Is it just an allusion to the rising of the terrestrial sun? Well, the album is called ‘Land of the Midnight Sun’. So there’s that. But the album also features a track called “The Wizard”. So…yeah. The frenzied Funk-influenced tune, which could just as easily be mistaken for a Progressive Rock number as the experimental Jazz fusion composition it’s presented as, doesn’t really offer any clues. Portions of the suite—which features Jaco Pastorious and Alphonse Mouzon slapping bass and skins respectively—are alternately kinetic and cacophonous, laid-back and spacey, and propulsively funky. It’s not exactly screaming “stodgy Brits indulging in esoteric nerdery”, but personally, I’m not getting a “sunrise on the horizon” sort of vibe from this “Golden Dawn” either. So sure…this is an ode to pasty English sex magicians.

‘Land of the Midnight Sun’ was Di Meola’s debut album. He’s released 23 solo LPs since, the latest being 2015’s ‘Elysium’.