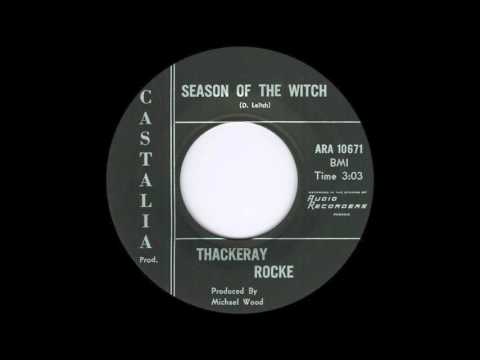 If you’ve been reading Monday Magick for a while you know that every October, in honor of Halloween, I dedicate a month’s worth of posts to various cover versions of British Psych-Folk grandmaster Donovan’s classic composition “Season of the Witch”.  The song has been covered quite a few times, in several different styles, by an eclectic array of artists and over the last few years I’ve shared some of my favorite takes on it here in this space.

It’s been a fun experiment, but it was an inevitability that I’d eventually run out of “Season of the Witch” covers.  And, sadly, it looks like this will probably be the last spooky season I’m likely to be seen setting aside space for honoring “Season of the Witch” as I’m down to only the most obscure versions of the tune by some less-than-name-brand musicians.  Like, for example, this decidedly lo-fidelity but quite psychedelic reimagining from Phoenix, Arizona-bred five-piece Thackeray Rocke.

Other than a list of personnel and several mentions of the fact that they were from Phoenix there’s not a ton of information about this oddly named Psyche-Rock quintet available online.  The fact that we even have the handful of YouTube rips of their 7” vinyl singles, including their stellar rework of “Season of the Witch”, to remember these guys by is remarkable considering the dearth of data we’re facing otherwise.  But at least what we have is memorable, particularly their cool and slightly creepy version of “Season of the Witch” recorded in 1967 for the Castalia Productions label.

Like several takes on the song previously featured here Thackeray Rocke’s version is driven by an organ figure that sits somewhere in the midst of a groovy Soul revue, a Gospel revival, and Scooby-Doo reruns by setting up an ambiance that is cheesy, churchy, funky, and a tad spooky.  This vibe is helped along by reverb-laden guitar strums and eerie chorus style vocal accompaniment.  But the truly ear-catching element of this recording is the heavily effected vocal overdubs heard throughout the verses which answer the song’s lyrics in an almost call & response style utilizing a sound not dissimilar to the signature tremolo effect on Tommy James and The Shondells’ “Crimson & Clover”.  When I heard that seep out of my speakers this morning I just knew this was the right choice for kicking off our October tradition this year!

Sure it’s pretty scratchy sounding.  And it’s one of the shortest versions of the tune I’ve ever posted.  But it’s a memorable remake of the classic cut that, sadly, very few people are likely to have heard.  Only the horned Gods of the ancient witches know what happened to Thackeray Rocke after releasing it into the world.