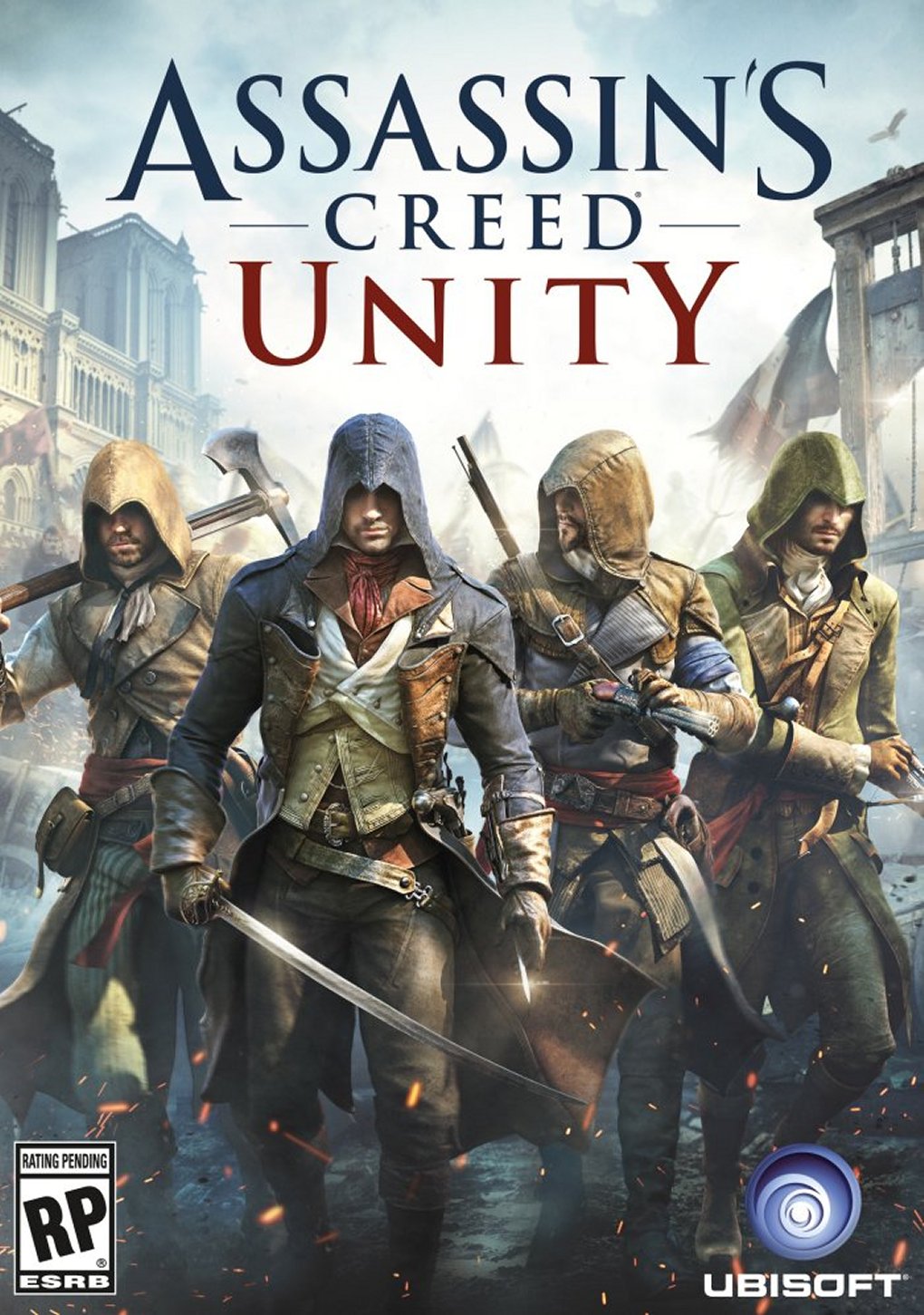 Last month ‘Assassin’s Creed Unity’, Ubisoft’s ambitious first “next gen” entry in its long-running historical-fiction adventure series, was released amid a flurry of complaints. The biggest issues seemed to be frame-rates dropping well below the supposedly locked rate of 30fps, the in-game economy which allows players to “level up” their assassins by buying “points”, and a weird system of companion apps and websites that are required to win certain rewards.

Fiber artist extraordinaire m. Cody and I have been playing the game, on SONY’s PS4, solidly since its release and have only experienced one instance of frame drop. It happened to occur in the same exact location as one of the videos posted by IGN, on top of a church roof with no NPCs or enemies anywhere nearby, so it had no effect on gameplay. Otherwise the game has run superbly and looks beautiful, only giving us issues after a recent patch. As for the “points”, all of the items and skills that can be purchased can also be earned by simply playing the game, and since ‘Assassin’s Creed’ isn’t a competitive game it doesn’t really matter if other players choose to pay for them or not.

For me, the only major gripe I had about the game, namely that all these French people are running around spouting dialogue in British accented English, was just as easily addressed. I simply changed the in-game language to French with English subtitles, so all the in-game characters, from lowly NPCs right on up to our assassin Arno simply speak French, with English captions, like they aught to. Any remaining reservations I might have about ‘Unity’, which I’ll address later, are related to the games’ treatment of the historic milieu and how its characters act within it, something not unusual for a work of “historical fiction”.

Graphically, the game is goddamn gorgeous, with sumptuously rendered backgrounds and breathtakingly fluid animations, especially during free-running and fight sequences, while the new assassin customization option brings several new flavors of eye candy to the game. Ubisoft promised new gameplay dynamics when it came to movement and combat as well, and they delivered with new attack and parry controls, a dedicated crouch button, an entirely new cover system, and a dedicated free-run “down” button. And trust me, you’re going to need that down button, and appreciate all the work that went into rendering those pretty-pretty pixels a whole helluva lot more, as you traverse the games e-fucking-normous 1-to-1 scale recreation of Revolution-era Paris!

Even with the improvements to the controls Arno, like previous assassins, can prove a bit squirrely when it come to making him go exactly where you want him to. Once you get the hang of things movement is pretty fluid, and as I said watching him move can prove a thing of beauty, but there are still those moments where he simply won’t do exactly what you want him to. Same goes for combat, as the new system actually makes combat simpler and easier in a lot of ways, but there are times when the sheer amount of enemies and their difficulty level can be frustratingly overwhelming.

My only other frustration comes from the story, which so far seems a bit confused in its presentation of the French Revolution and its portrayal of the Assassin and Templar orders in relation to it. The personal story of the character we play as, where our protagonist Arno is the son of a murdered Assassin raised by a Templar who is in turn murdered thus inspiring him to join the Assassins in search of revenge is, despite this convoluted sentence, straightforward enough. But within the larger framework of the Revolution the roles of the Assassins and Templars becomes murky at best. I’m forced to ask, what exactly are the motivations of the Assassins in this story? Whose side are they on?

Historically the series has portrayed the Assassins as the guardians of ultimate freedom and advocates of a certain brand of chaos and anarchy in the face of the Templars who desire only power and to exert their control over everything. But here they seem to be playing against type, with the Assassins standing against the chaos of the revolution and siding with the aristocracy, which doesn’t make a whole lot of sense. The early commercials for the game made it seem like the Assassins were enabling the people against the government and assisting in overthrowing the bourgeoisie, even to the point of throwing people to the crowd to be executed. So far the protagonist in the game seems to be doing the opposite. The portrayal of the Revolution as a whole just seems odd, and a little “off” somehow.

As I said, the basic story that motivates Arno himself and drives the game is satisfying, as is the larger mythology involving Abstergo, the animus, and how they’ve progressed here in the present-day. But I would have liked to have seen the background story of the Revolution and the warring Templar and Assassin factions’ role in it handled different. Personally I think it would have made sense for historical characters like Count Cagliostro and Count Casanova (both of whom had a hand in the occult, secret societies, and espionage during the era) to make appearances. An exploration of the Royal family’s obsession with Poussin’s painting of The Arcadian Shepherds bearing the motto “Et in Arcadia Ego”, which was alluded to in an earlier game, would have been nice too.

In the games defense, going that route would probably make the influence of Robert Anton Wilson’s ‘Historical Illuminatus’ series on the AC franchise as a whole a bit too obvious, even if it would make for a better story more rooted in the esoteric history of the Revolution. And I guess the fact that the real life execution of Louis XVI concluded with a man stepping out of the shadows and shouting “Jaques Demolay, thou art avenged”, which would be a decidedly pro-Templar thing to say, kind of means that the in-game Assassins would HAVE to be anti-Revolution…Even though it makes no sense philosophically when analyzed against the games mythology…Nor would it make a lick of sense historically.

All nit-picking aside, I do think ‘Unity’ is an extremely ambitious entry in the series which improves upon the game’s playability and visual presentation. I’m still enjoying playing it as I work my way through the massive world-map and am looking forward to what the series will hold in the future. Next year’s entry in the series, code-named ‘Victory’ set to take place in Victorian London, is already on my radar. But I hope to see more variety in settings, including China during the Boxer Rebellion, India during the British occupation featuring nods to the Thugge or the real-life heir to the Assasins The Agha Khan, post-Moorish Spain around the time of Columbus, and maybe an Indiana Jones-style globe-hopper featuring Aleister Crowley, Nicola Tesla, Harry Houdini, and the like, as we move forward.

Who knows where the series will go? After all, part of the creed itself is that “everything is permitted.”